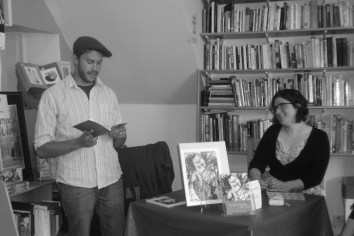 After graduating from the University of Baltimore’s MFA in Creative Writing and Publishing in the spring of 2013, where Jeffrey self-published his debut collection of stories, This Year in Jerusalem, the author set out for Europe and Israel on a yearlong book tour. During his time abroad, Jeffrey organized several readings, wrote articles about selling his collection in a foreign country, and also produced some new media projects inspired by his adventures on tour. The below links provide additional background concerning Jeffrey’s experience as a kibbutz volunteer in Israel, personal reflections on his Jewish American identity, travel memoirs based on his encounters in Israel as well as posts concerning his collaboration with Irish artist, Diana Muller.

Behind the Book – Author’s reflections on the writing of This Year in Jerusalem, and marketing the book abroad. Published by JNS.org, November 10, 2013

Interviews with Israeli Authors – During Jeffrey’s stay in Israel he had the opportunity to meet with and interview several of Israel’s most beloved authors including Eshkol Nevo, David Grossman, Ido Angel and Roni Gelbfish to write an article about Israel’s literary scene. Published by JNS.org, November 10, 2013

Publication Party -To celebrate the publication of This Year in Jerusalem, Jeffrey and his wife invited Baltimore Artist Dara Lorenzo to create a one night only collaborative gallery showcasing the artists photography  in dialogue with excerpts from the book. Published by Monologging.org July 14, 2013. 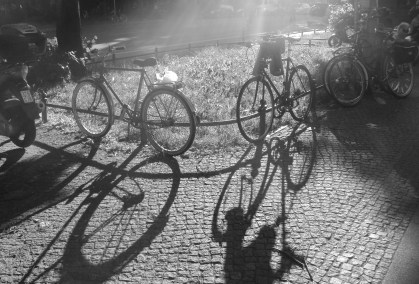 Book Signing in Ireland – After six years of collaborating via email and skype, Jeffrey visited Diana Muller in Ireland during the summer of 2013, where they organized a small reading and book signing at a local cafe in Kenmare. Published by Monologging.org July 16, 2013

Berlin – Next stop on the tour, Germany! In this feature multi-media slideshow, Jeffrey takes a break from book touring to contemplate the mood of Berlin during President Barak Obama’s summer trip, an occasion shadowed by events in Syria and revelations of sinister espionage. The presentation combines Jeffrey’s black and white photography with an original poem and uses music by Marlene Dietrich. Published on Monologging.org September 5, 2013

600 Strangers: Book Tour Encounters – Having nearly sold out of the first edition of This Year in Jerusalem, Jeffrey reflects on some of his encounters on the book tour and discusses the writing life with Dutch author Anouk Kemper. Published on Monologging.org November 6, 2013

Intermission – Taking another break from the tour Jeffrey reflects on his travels to Rome, and another trip the Northern border of Israel where he witnessed the carnage of the Civil War in Syria.